In this example we will take a look at the MSP430FR4133 launchpad from Texas Instruments. There will be a blinky LED example which was written in Code Composer studio.

The MSP-EXP430FR4133 LaunchPad development kit contains everything needed to start developing on the MSP430 Ultra-low-power FRAM-based microcontroller platform, including on-board emulation for programming, debugging and energy measurements. The board features on-board buttons and LEDs for quick integration of a simple user interface as well as a Liquid Crystal Display which showcases the integrated driver with flexible software-configurable pins. The MSP430FR4133 device features LCD support with an integrated 10-bit ADC as well as embedded FRAM, a non-volatile memory known for its ultra-low power, high endurance and high speed write access. 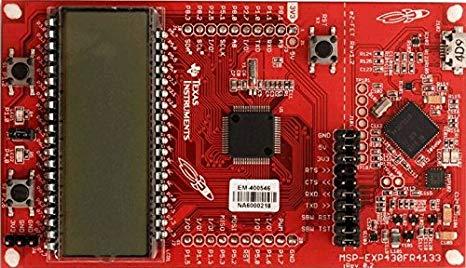 As stated this is a Code Composer studio example, so you will need to download that and create a new project. http://processors.wiki.ti.com/index.php/Download_CCS

In this example we will blink the LED on for 1 second and off for 1 second, here is how we will do this

The ACLK increments the peripheral around about every 25µs. Therefore, to count for 1 seconds, we would need to count like this: